Arranged Marriages: The Cause of Divorce? 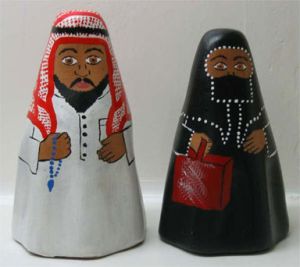 The day she has been dreaming about ever since she was a young girl has come. A special wedding song marks her entrance, and as she walks down the aisle in her majestic ball-gown white dress, her dearest family members follow. Allowing her dress to overflow the bridal couch, she remains seated waiting for her soon-to-be life partner, who she has only spoken to through the phone, to walk in.

This traditional union is not yet an outdated phenomenon in many societies of the world. In Qatar, where men and women get married in their late teenage years or early 20s, arranged marriages are the norm and yet the divorce rates are high.

In the year 2010, 1,207 men and women got married, and 528 got divorced, according to a recent study conducted by Qatar Statistics Authority. In addition, in societies where arranged marriages are no longer the norm, like in Europe or the US, divorce rates are high.

According to a 2009 study conducted by the center, family interferences, woman abuse, failing of sexually satisfying your partner, a wife neglecting to care for the family and her dependence on a housemaid, and jealousy are among the reasons why married couples want a divorce. However, most divorcees decide to return to their husbands or wives.

Qatar with its rich and sophisticated cultures and traditions, and a country whose people have great respect for their religion, is a commonplace for arranged marriages. The chance to find a marriage based on love in Qatar is very low. “It is just not right,” says Abdulla Saeed Binnoora, a 27-year-old field technician, about love marriages. Binnoora would consider an arranged marriage trusting that his mother, who had an arranged marriage, would choose a compatible wife for him.

Arranged marriages are usually tied to Islam because in Islam, relationships between a man and woman before marriage are discouraged. “Islam encourages arranged marriages but not like my father decided for me,” says Susan Zaghmout, an Islamic educator and a counselor. “If a guy likes you, and wants to get to know you, we don’t call it dating, we call it engagement. It has to be official, through the father.” During the engagement period, the man and woman get to know each other through phone conversations, and if they’d like to see each other, they can do so but with companions. And if feelings develop, then the union can go further. However, “we are not following our religion,” Zaghmout believes. “The more we farther from our religion, the more we are not aware of our rights.”

But for Mohamed Haji, a 19-year-old freshman in Weill Cornell Medical College in Qatar, arranged marriages are just not right. “Honestly, I don’t think it’s a good idea because there’s a higher risk of diseases; and if the marriage fails then both families will grow apart from each other,” he says. However, Haji is only addressing arranged marriages among family members, which are most common in Qatar. Furthermore, Haji sees arranged marriages as forced or undesired marriages. “It’s because of arranged marriages and the expectations that Qatari women have of their husbands that result in high divorce rates,” he added. Although divorce is discouraged in Islam especially if children are involved, he or she has the right to ask for one.

“I strongly disagree with arranged marriages as I believe that both sides should have a say. Nowadays, the rate of people getting divorced is increasing, which I think is due to marriages that have been arranged by their parents,” says Maryam Al Darwish, a communication student at Northwestern University in Qatar. “In some cases, the girl has no say in the union, which is where problems may arise. In some families, to deny an arranged marriage is a sign of disrespect towards the family,” Al Darwish added.

Although Al Darwish has grown up in a family and society in which you are expected to have arranged marriage, she would never consider it because one day she would like to marry someone whom she is familiar with. On why arranged marriages are still popular, she says, “arranged marriages take place because of the parents mentalities. They still live through old experience, and probably because some of them have gone through that, they’d expect their children to go through the same, as a tradition,” and adds, “because women are educated, some studying with a diverse community, they now are more aware of the consequences and would choose not to accept arranged marriages.” Although arranged marriages still take place, there are Qatari girls like Al Darwish who seem not to be pressured into such unions. Al Darwish’s parents did not themselves have an arranged marriage, so she is not worried about being pressured by her parents into a marriage that she does not approve of.

“It doesn’t always work out,” says a 20-year-old Qatari girl, Areej Mohamed Zaghmout who studies in the United Kingdom, about arranged marriages. “In order for couples to get married, they should know each other first and both agree on sharing their future together on their own without anyone forcing them to.”

What many don’t realize is that arranged marriages fail because in many cases, parents force their child into an unwanted union. But if the man or woman personally decide to have an arranged marriage then it is more likely for the marriage to succeed. “They believe they should be the ones to make the decision in choosing the life partner for their kids, but most of the time they are just scared their child might choose someone that’s not from the same level as them, or from a different society,” says Zaghmout. According to her, arranged marriages are becoming obsolete in Arabic societies because the societies are becoming liberal and flexible, and women are becoming strong and independent.

Although arranged marriages seem to be outdated and obsolete in many Western and Europeans societies, many people still practice it in the most modern ways. Some people depend on matchmaking or matrimonial websites, or through matrimonial agencies or agents to find their compatible match.

In Qatar, Om Khalifa is one of the many matrimonial agents whom people depend on to find an eligible life partner. The 47-year-old married Qatari woman has been in the matchmaking business for about 15 years, which is a business that has been in her family for generations. Om Khalifa’s matchmaking process is confidential but her clients are predominantly women. Some local women believe an unmarried woman cannot appear in public places with other unmarried men or women. Therefore, women are not seen by others to be able to find a suitable husband by themselves. Although Om Khalifa encourages all kinds of marriages, she finds arranged marriages comply best with Qatar’s culture and tradition. “We can not forget that we are Muslims and we have to take our traditions and cultures in consideration; therefore, arranged marriages are best,” she says.

It is difficult to predict whether an arranged marriage or a love marriage is the ideal marriage, as both marriages do not always have happy endings. Eventually, it is each individual’s decision to what he or she perceives as a happy marriage and choose a suitable partner to spend the rest of his or her life with. After all, a happy marriage, whether by love or arranged, does not happen overnight, it needs work, but the question is, are you willing to commit?

3 thoughts on “Arranged Marriages: The Cause of Divorce?”