During the second half of an NFL football game, Sunday, Sept. 8, 2013, in Jacksonville, Florida. The Chiefs beat the Jaguars 28-2. (AP Photo/Stephen Morton)

It’s an honour to be selected by Aspire Zone Foundation and the NFL to teach American football in Qatar at their Ramadan Sports Festival…being chosen from an elite pool of professional athletes is humbling. I look forward to teaching, coaching and sharing my passion for American football with the participants in Doha.’

Abdullah will participate in a range of activities focusing on promoting American football and demonstrating how he balances a professional sports career with his Islamic faith.

This is my first time here in Qatar. It’s been an awesome experience … teaching football, putting on camps for the youth and just kind of instil that fun and enjoyment in them.’

American football is one of those games we are providing support to encourage and spread. So far, it has received a good turnout and we hope it continues to do so. We are honoured that Husain Abdullah is coming to Qatar to support our Ramadan activities at Aspire, that are diversified to meet all the community needs and are in line with the spirit and values of Ramadan. Husain is a role model for Muslim youths as he demonstrates his commitment to Islam while fulfiling a professional sports career. We look forward to Husain joining our sports competition, sharing his knowledge with our youth and inspiring us with his inspirational story.’

A feature of the month is the Third Ramadan Sports Festival, which includes a Flag Football tournament, a variation of Abdullah’s sport – American football. Abdullah’s schedule will include training sessions for local flag football teams and a special coaching clinic for the youth of Qatar. Talking about the flag football team, Abdullah said:

A lot of them have previous knowledge of football and they have some skills here but the mentality is kind of different [because they watch soccer a lot].’

Comparing the ever-popular soccer to American football, he added:

Before coming to Qatar, Abdullah went to Mecca, Saudi Arabia to perform the Umrah pilgrimage for a second time. He said:

When AZF reached out to me and invited me over, the first thing I asked is will I have the opportunity to go to Umrah, and they said, ‘Yes, just come out a couple of days early and we will be able to help you with that’. I’m very thankful. They have been great hosts … coming from the US, my mentality was if I’m going to travel 15 hours by air, I better make a stop to go to Umrah first.’ 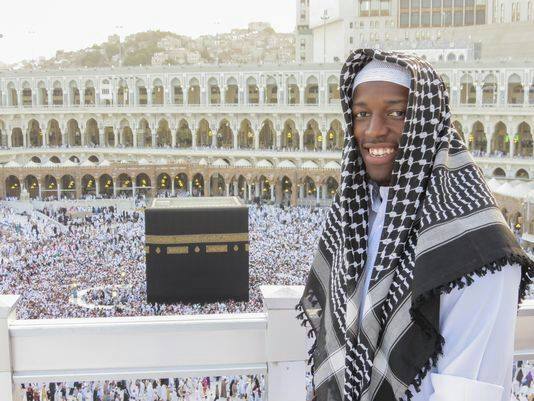 Abdullah originally signed with the Minnesota Vikings in 2008 before missing a full season in 2012-13 to make his first visit to Mecca for Hajj and Umrah. Upon returning to the US, he signed with his current team, Kansas City Chiefs. Explaining his choice on why he decided to miss a full season to go to Hajj, Abdullah said:

I didn’t have to skip a season. That’s something I chose to do. It wasn’t like Islam forced me to do that. It was something that I wanted to do. I could’ve very much waited like a lot of people wait until they’re older. But it’s something where I felt like I needed to go right now so I did.’

Born into a family of devout Muslims and American football players, he said:

Nothing in this world is more important to me than worshiping Allah the way He has instructed us to do. With American football being a sport I love, I must find balance to make sure that my enjoyment of sport does not interfere with my worship of Allah. I continue to work towards a balanced lifestyle so I can continue enjoying the game I love, while keeping Allah first.’

Being both a Muslim and an American football player has brought a lot of media attention to Abdullah, especially when he decided to miss a full season for pilgrimage. But according to Abdullah:

However, Abdullah admits that a social responsibility comes along with the job. He explains:

There is a responsibility because sometimes, believe or not, when meeting people, I’m the first Muslim they have ever met. So they see and read all kinds of things on the news outlets so as soon as they see you, the first thing they want to see is if you’re like what the papers and all that say. Then, after that, they unload a bunch of questions so it’s a blessing from that point, because you get the chance to educate people.’

Born in 1985, Abdullah is from a very large family, being one of 12 children. His brothers are football players as well. Abdullah’s brother, Hamza, is a well-known former NFL player. Abdullah associates his passion and talent for football to his family, and simply to the enjoyment of the sport. He said:

When we were younger, my pops kind of threw my brother [Hamza] in there [the game]. At first he was like, I’m not sure. So my older brother, Abbas, was the first to go in. We’ve seen his team and his team went to the championship. He is doing touchdowns and we’ve seen the excitement. So we were like, ‘Man, I want to do that’. So next year, when it came to the sign-ups, we were there and ready to rock. It was just fun. It was just being a little kid and wanting to have fun.’

Today, in Qatar, Abdullah will see the kick off of the Flag Football tournament at Aspire Zone. He said:

I can’t say thank you enough to AZF for bringing me out here. They have been great hosts and made this a very fun trip. Thank you and I’d really like to come back.

The original was published on Marhaba on 8 July 2014.