Hope – hope for love, happiness and success are some of the many things we feel and strive for in our daily lives. In a new Sudanese drama series, we see how these key pillars of life play out in the lives of young Sudanese men and women living in the diaspora.

Asham, meaning hope, is the center of the Sudanese drama series, depicting the life of Sudanese diaspora, specifically in the Middle East. “The storyline surrounds the meaning of Asham,” said production manager Ahmed Mahdi Gorashi, who is one of the leading creators of Asham, along with director, Mohamed Kamal and Saudi producer, Wissam Alkaf. “We emphasize on the issues and challenges the Sudanese diaspora face, and reflect a real picture of Sudanese lives of all kinds, including customs and traditions,” Ahmed added. “The idea or inspiration behind Asham came from the lack of youth-based Sudanese drama/theatre,” he added.

The first three episodes of Asham were first unveiled on YouTube in June 2017 during Ramadan. However, word of the drama series first came out in April 2017 when the trailer appeared on Facebook. Each episode has gained over 200,000 views on YouTube, lasting between 13 to 25 minutes. “We want to encourage more Sudanese viewers to be aware of YouTube,” said Ahmed, adding “YouTube has become a new platform for swift publishing.” 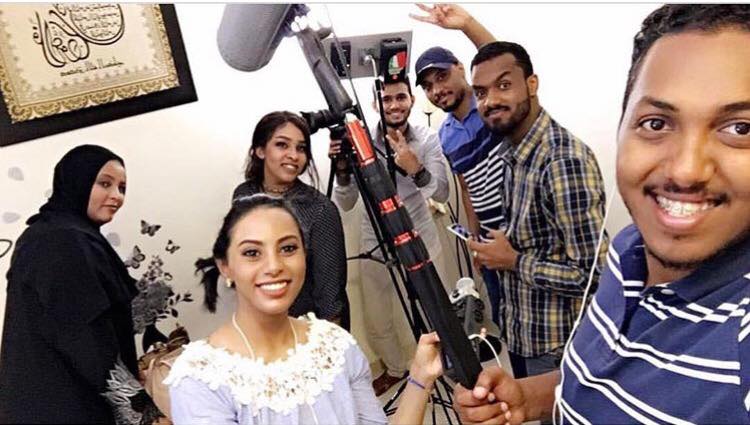 Saudi producer, Wissam Alkaf, who also plays the role of a Saudi sponsor, bringing Sudanese workers from Sudan to Saudi, is currently fully funding and sponsoring the show. “We agreed with him that we’ll produce three episodes and then hopefully a sponsor will come in. A few promised from Saudi and the UAE but unfortunately they pulled out and disappointed us. Thankfully, Wissam said he’ll continue to sponsor the show mainly because he saw the success and how much people were talking about the show, so he wanted to continue supporting us,” explained Ahmed, adding that the making of the show has cost at least US $30,000 so far.

After posting advertisements on social media, the first casting call and acting audition for Asham took place in February 2017 in Saudi Arabia with only 36 showing up for the audition. According to Ahmed, more males than females applied for roles, and those females who auditioned and got the part had to later pull out due to family restrictions. “We found difficulty convincing families. Our Sudanese society is very conservative. Mohamed Kamel and I had to speak to the parents of interested actresses to explain that it’s a production for the youth. That it’s not political or morally offensive; it just focuses on the youth especially those in the diaspora and their lives,” explained Ahmed. “Many were happy with it but were afraid of the filming and whether it was legal or not. Of course, we obtained a media license with the help of Wissam Alkaf, but we had to show them the license that would allow us to film at specified locations. Some parents were upset when the filming took too long. Sometimes, the actresses went home at 1 am or 2 am, but eventually their parents got used to it,” recalled Ahmed. Regardless, the Asham team currently comprises of at least 30 people including the actors, actresses and production team.

“We’re not filmmakers, actors, actresses, etc. This is something we’re doing in our free time. I’m an engineer. Mohamed Kamal is a petroleum engineer. During the day, we go to our jobs and we film in the evenings and mostly on the weekends; Friday and Saturday. If we had more time, we would finish sooner. The responsibility has become greater and even our parents are involved and concerned, asking about the progress of Asham,” explained Ahmed.

Telling a story of many, the drama series mainly follows lead actress, Salma, played by Abeer AlSheikh, who is caught in a love triangle between a family friend, Walid, played by Hassan Kasala, and new acquaintance, Ammar, played by Ibrahim Nagi, who is also the voice behind the theme song of Asham, written by poet Manal Taha. With no more than the first three episodes of Asham on YouTube, we see only the beginning of the love triangle.

Although romance plays a big role in the drama series, viewers also get a glimpse of the hardships the Sudanese diaspora face in the Middle East. Contrary to popular opinion, the series shows a more financially-struggling Sudanese diaspora. In the pilot episode of Asham, a heart-breaking scene takes place when Salma’s father falls sick and she has a discussion with her mother, revealing that they’re unable to seek treatment as they’re unable to cope with the healthcare expenses. At one point, Salma suggests moving back to Sudan. However, her mother tells her that they have nothing to return back to.

In the latest episode of Asham, Episode 2, a new character just arrives to Saudi Arabia from Sudan, sitting playing cards and shocked to hear the reality of living abroad. A master’s degree holder, the new character tells others of how he had to sell his minibus, commonly called Amjad, in order to be able to afford to travel. This revelation is received with laughter and disbelief as one person tells him that he is trying to make enough to buy an Amjad, while others begin to express their disappointment, telling him how they landed low-income jobs as merchants, although they hold law and engineering degrees.

The show was filmed and produced by Sudanese production company, Sudio Channel, in Saudi Arabia. Asham is the first production of Sudio Channel. “We actually work on a lot of Saudi productions, but this is our first Sudanese production,” said Ahmed. When asked if they have encountered any obstacles or restrictions especially when shooting mixed scenes, Ahmed said no, explaining that “the Saudi society has become more accepting to media.”

With the new residency permit laws in Saudi Arabia, it is believed that approximately 50,000 Sudanese are returning to Sudan. According to Ahmed, the new laws had an impact on the film. “Our whole team faced challenges, and unfortunately three of our actors had to leave Saudi and the show, and returned to Sudan. One of them is an important character, Mohamed Tahir, who played the scene with the Saudi actor, Wissam Alkaf, and played the role of a Sudanese scoundrel who befriends Saudis and speaks Saudi more than Sudanese. He is the brother of Hanan (Salma Alsheikh). We changed the scenario where he gets caught for illegal activity and gets deported to Sudan,” Ahmed explained.

After its YouTube success, Asham has managed to land a one-year contract with one of Sudan’s most popular TV channels, Sudania 24 (S24), where it will soon air to the public. Asham landed the S24 deal through a social media organization called Takween, which is responsible for various shows’ social media. “They tried to find us a sponsor. They have an agent in Sudan called Tariq Alsheikh who went to Zain, MTN and more to find sponsorship but then he found S24. When he approached them with the proposal, they took sometime then said yes after watching our social media engagement and episodes,” said Ahmed. The show will air 30 episodes including the first three YouTube episodes. “There will definitely be improvements in the filming and production. And you’ll see new characters,” he added.

Due to this breakthrough, Ahmed, Mohamed and Wissam held another two casting calls and acting auditions. “In the second casting call, we had at least 100 people auditioning. We were surprised with the turnout because as first, we were struggling, looking for actors, and now they are looking for us! After the two casting auditions, we added new characters, at least six characters,” said Ahmed, confirming the new cast will include a mother for Walid and a young brother for Ammar. “It will be 30 episodes so of course we need more events and drama so we’re trying to make it a bigger success. It will all be shot in Saudi, the whole first season. If all goes well, we might take the show to Sudan. If this season is a success, we might consider a second season,” he added.

The original article is published on Andriya and it’s also available in: Arabic.